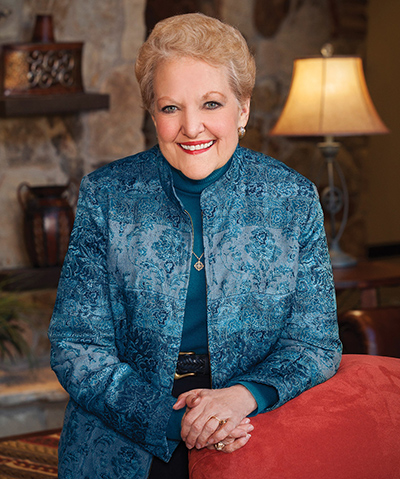 June Hunt, M.A., is an author, singer, speaker and founder of Hope For The Heart, a worldwide biblical counseling ministry. Her lifework has yielded landmark contributions in the field of Christian counseling.

Hope For The Heart, which she founded in 1986, offers biblical hope and practical help — through biblical counsel, coaching and context for contemporary concerns — in more than 60 countries on 6 continents.

Early family pain was the catalyst that shaped June’s compassionate heart. Later as a church youth director, and then becoming a college/career director, she became aware of the need for sound biblical counsel. This led June to a lifelong commitment to provide God’s Truth for Today’s Problems.

After years of teaching and research, she developed Counseling Through The Bible, a scripturally based counseling course addressing 100 topics, such as Marriage, Parenting and Boundaries … Anger, Addictions and Abuse … Depression, Stress and Suicide. These resources grew to become the 100-topic Biblical Counseling Library, which helps people move from wrong thinking to right thinking … and from wrong living to right living.

Early family pain was the catalyst that shaped June’s compassionate heart. Later as a church youth director, and then becoming a college/career director, she became aware of the need for sound biblical counsel. This led June to a lifelong commitment to provide God’s Truth for Today’s Problems.

After years of teaching and research, she developed Counseling Through The Bible, a scripturally based counseling course addressing 100 topics, such as Marriage, Parenting and Boundaries … Anger, Addictions and Abuse … Depression, Stress and Suicide. These resources grew to become the 100-topic Biblical Counseling Library, which helps people move from wrong thinking to right thinking … and from wrong living to right living.

The Keys for Living were also the foundation for the ministry’s two award‑winning radio programs. Hope For The Heart, which aired from 1986 to 2020, featured real stories of people discovering answers and hope to some of life’s toughest challenges. Hope in The Night is a live one-hour call-in counseling program that helps people untie their tangled problems with biblical hope and practical help. Through her warmth, wisdom and gentle candor, June prompts penetrating dialogue with listeners, often with life-changing results.

Reaching Homes and Hearts Around the Globe

The ministry has steadily grown internationally, crossing borders and language barriers with the message of hope in Christ. Many Hope For The Heart resources have been translated into over 35 languages with more translation requests coming in yearly. In 2002, June’s first international book, simply called The Keys, received the “Best Book of the Year” award when introduced at the St. Petersburg’s Book Fair. Today, Hope For The Heart partners with indigenous ministries, often in difficult-to-reach countries, to imbed tools and training to help leaders counsel, disciple and apply the Word of God. Hope For The Heart also reaches Chinese- and Spanish-language speakers around the globe with online counseling and training resources.

In 2008, Hope For The Heart partnered to create two new Chairs of Biblical Counseling at Criswell College in Dallas and Southwestern Baptist Theological Seminary in Fort Worth, Texas. The Biblical Counseling Library is required curriculum for counseling students at these schools, as well as others.

In 2020, the ministry launched “Lifeline to Hope,” a first-of-its-kind online course to train and deploy a worldwide army of caregivers — individuals able to effectively provide short-term support, encouragement, spiritual care and referral services — connecting a life in crisis with a life in Christ.

On the Go for the Gospel

June has written numerous books, including Bonding with Your Child through Boundaries (with PeggySue Wells), Bonding with Your Teen through Boundaries (with Jody Capehart), and Caring for a Loved One with Cancer, which comes from her own experience as a cancer survivor. June is also a contributor to The Soul Care Bible and the Women’s Devotional Bible. Her other books include: How to Forgive … When You Don’t Feel Like It, the Counseling Through Your Bible Handbook – a distillation of 50 of the ministry’s most requested topics – the popular devotional Seeing Yourself Through God’s Eyes, the Biblical Counseling Reference Guide, How to Handle Your Emotions, The Answer to Anger, How to Rise Above Abuse, Hope for Your Heart, How to Defeat Harmful Habits and How to Deal with Difficult Relationships.

June is always on the go! Whether as a guest professor at colleges and seminaries or as a conference or broadcast speaker, she is grateful for every opportunity to share the hope of Christ, both nationally and internationally. June’s best-selling minibook series of 46 topics has sold over 1.5 million copies, especially in airports, grocery stores and drugstores. In 2017, the Hope For The Heart Bible Study Series launched, which includes six Bible studies on the topics of Anger, Depression, Forgiveness, Stress, Verbal and Emotional Abuse and Self-Worth. June’s passion to help others through biblical counsel is fueled by her joy in seeing a life changed through Christ. She gives media interviews on a wide range of important topics, such as Childhood Sexual Abuse, Domestic Violence, and whatever hits the current news headlines.

As an accomplished musician, June has been a guest on the NBC Today show, has toured overseas with the USO and been a guest soloist with the Billy Graham Crusades. She currently has five CDs. The first three, The Whisper of My Heart, Songs of Surrender and Hymns of Hope all reflect her message of hope. The fourth CD, The Shelter Under His Wings, features 50 comforting verses from the Psalms spoken against a soothing instrumental backdrop that brings solace to the soul. She also has a CD celebrating Christ’s birth in song, The Hope of Christmas. You can listen to June’s music on Spotify.

“A Woman Who Fears the Lord Is to Be Praised”1

June’s work has earned accolades from numerous groups. The National Religious Broadcasters (NRB) has presented June and the ministry of Hope For The Heart with numerous awards. In 1986, the NRB honored the Hope For The Heart broadcast as “Best New Radio Program” with the Genesis Award. In 1989, the broadcast received the “Radio Program of the Year” award. In both 2010 and 2018, the ministry received the NRB Award for International Strategic Partnerships. In 2011, June received the NRB’s Board of Director’s Award and in 2012, the “Radio Impact Award.” In 1991, June received an honorary Doctor of Law degree from Criswell College and in 1993, an honorary Doctorate in Literature from Dallas Baptist University. In 2008, June was the recipient of Christian Women in Media’s “Excellence in Communications” award, and the Eli Lilly Corporation honored June with the “Lilly Reintegration Award” for her work to help those battling mental illness. In 2012, she received the Advanced Writers & Speakers Association’s “Golden Scroll Lifetime Achievement Award,” and in 2014, the American Association of Christian Counselors honored June with the “Caregiver of the Year” award.

In 2008, as founder and Board Chair of The Hope Center, June Hunt realized her vision of a permanent home for over nonprofit Christian ministries – each with a shared commitment to stewardship, synergy and service. The Hope Center is also home to HopeCare, the counseling arm of Hope For The Heart, where individuals can find help, hope and healing through the caring and wise counsel of dedicated, licensed professional counselors.

In 2020, the ministry launched its landmark Lifeline to Hope training program, a unique first-of-its kind resource to train and deploy an army of caregivers — people who are able to effectively provide support, encouragement, spiritual care, and referral services on a short-term basis — connecting a life in need with a life in Christ.